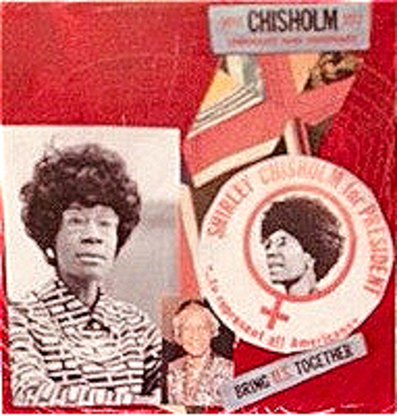 This piece celebrates the fabulous Motown girl groups such as The Marvelettes, Martha and the Vandellas, the Ronettes, and of course The Supremes.

Jeanette Rankin was the first woman elected to Congress. A Republican from Montana, a state that had woman suffrage before the ratification of the 19th Amendment, she served twice. An ardent pacifist, in her first term her first vote was against entrance into the War to end all wars. In her second term years later, she voted against entrance into World War II. 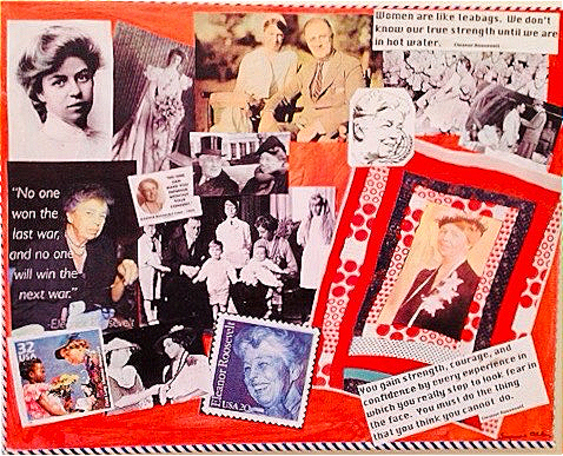 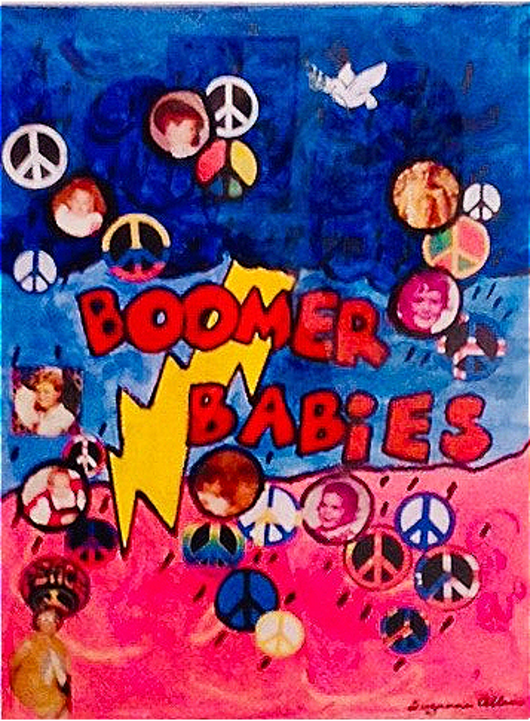 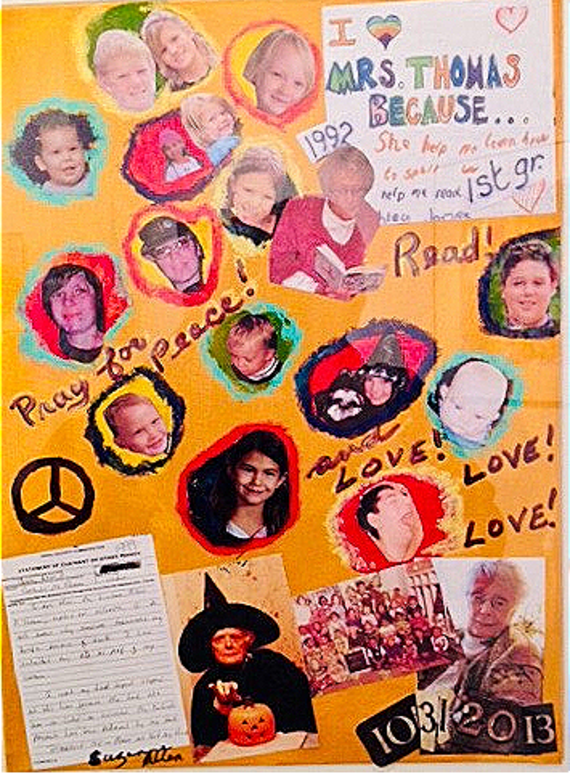 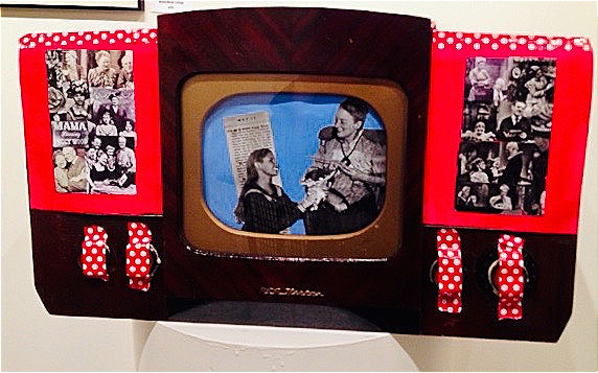 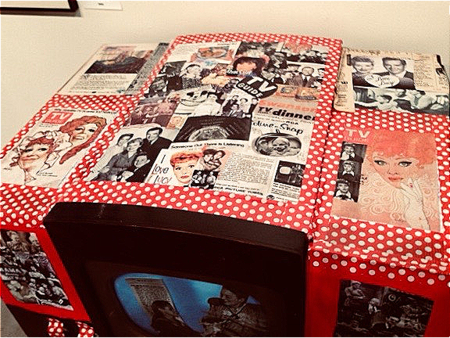 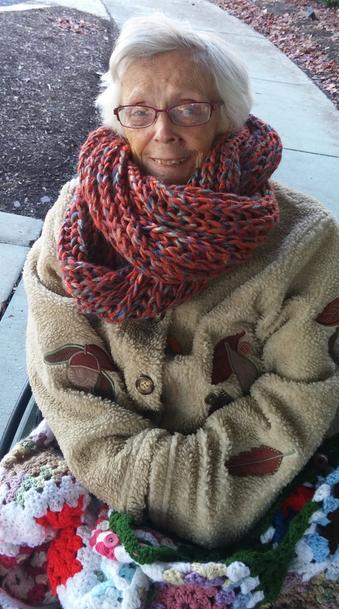 During World War II, women were expected to do what they had in the Great War, assume men’s jobs, ration food and gas, and go into the services, mainly nursing. Thus Rosie the Riveter. Several of my uncles served in the armed forces. My mom’s sister Joan, the nurse in this piece, lost her husband Tom Leslie, who was a pilot on the European front. My mother, newly married, and my father, who did not pass the army physical, set up house, planted a Victory Garden, and by the end of the war had three babies: me, my sister Mary Lou, and my brother Bob. Joan had my cousin Leah. 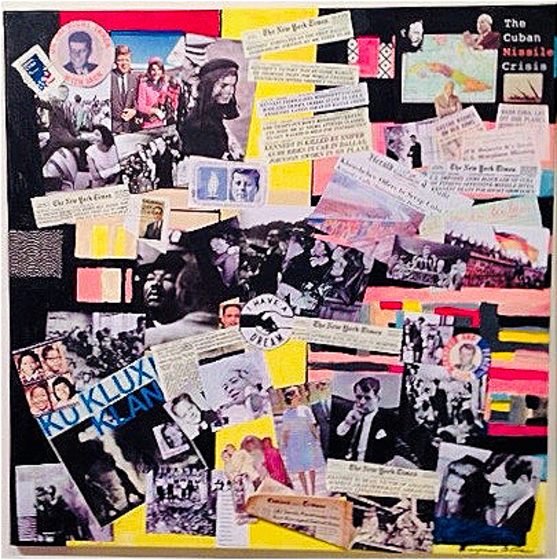 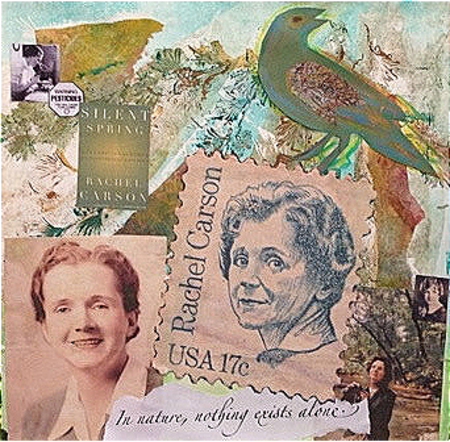 
During the ‘70s, ‘80s, and ‘90s, my mom used her college training and her own experience to teach nursery school, work with developmentally delayed children in a special program, and tutor reading and math in grade school classes. And when the boomer babies had their own babies, Grandma Great, as she is called, read to as many of them as she could. She loves to see all of them when she can, reads to them, prays for them, and even baptized a couple of them. In 1999, my dad died and my mom became a widow, which somehow the Social Security Administration misunderstood, but she got them to resurrect her. Soon after that she sold her house on Marlowe in Detroit that she and my dad bought in 1939 and she moved in with me. In the spring of 2013, she fell and broke her femur while in Buffalo and most of us were doubtful about whether she would be able to come back here to live, but Gertrude the good witch, Mom, Grandma, Grandma Great, Mrs. Thomas proved all of us wanting in our estimation of her grit. She did her physical therapy and returned home to read, pray, and love. The beautiful picture of my mother at bottom right was taken by my sister Mary Drogosh when my mom was in Rehab.

NOTHING IN NATURE IS ALONE
12" x 12" mixed media collage

In the early ‘60s, Rachel Carson, a scientist with the Fish and Wildlife
Department, wrote her third book, Silent Spring, which warned us of the dangers of pesticides on the ecosystem. President Kennedy, much influenced by it, honored her. She is sometimes called the mother of the environmental movement.

Perhaps technically my mom’s children weren’t boomers, but we had our children when the boomers did so her grandchildren are boomer babies. She read to all these boomer babies, loved them and taught them to pray. She was always a source of comfort and security for her grandkids. In fact she still is.

The bra was invented in 1913 and patented in 1915. But even before that, women’s undergarments were a wonder. In fact, the bra was meant to make things more comfortable, amazing as that may seem when we look at some of these examples, including “a Wonder Bra.” This piece traces underwear over the century. What it excludes is pantyhose, perhaps worth a piece of its own. 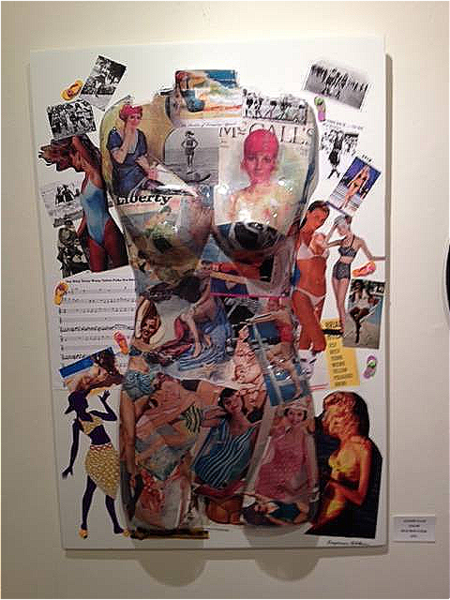 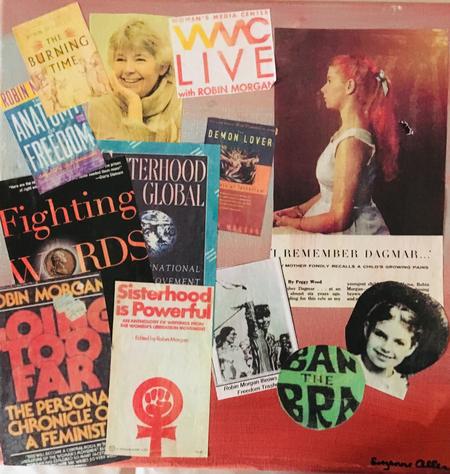 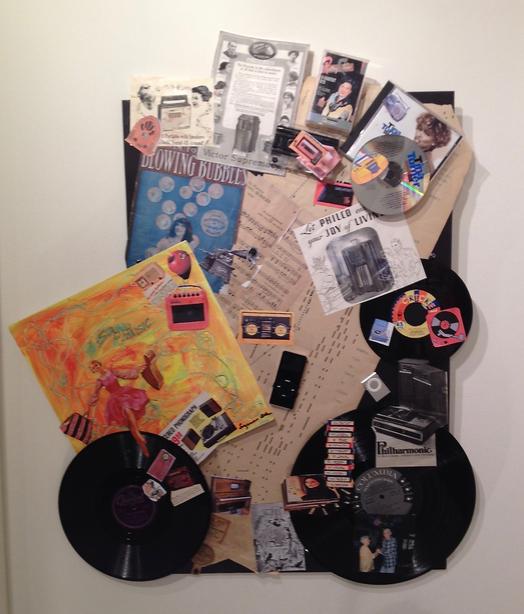 The late ‘60s and early ‘70s were filled with protests for peace and love, for racial and gender equality. All three causes seem to coalesce in Beatles songs, folk singing, and trips to the moon while we all imagined universal peace--even all the Miss Americas. My mom imagined herself getting the college degree she had deferred during the Depression, wars, and marriage. She enrolled at Wayne State University in an Early Childhood Education program while keeping house and bookkeeping at my dad’s business--Thomas Display Signs.

Probably the most notable woman during the Depression and World War II and beyond was First Lady Eleanor Roosevelt. She became the President’s eyes, ears, and legs, traveling often in his stead, visiting troops and poverty-stricken areas of the country. Using planes, trains and automobiles, she spoke and wrote in behalf of ordinary Americans. After WWII and the death of her husband she continued to staunchly support the establishment of the United Nations as a road to peace. She supported equal rights and women’s rights worldwide. She was instrumental in replacing a restrictive venue with the Lincoln Memorial as venue for Marian Anderson. 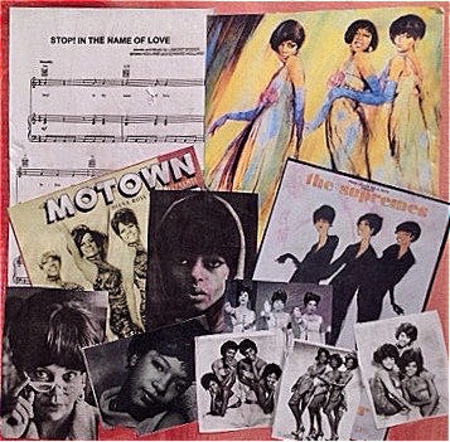 BUT MOST OF ALL I REMEMBER MAMA

After World War II, the country focused on putting the returning men back to work, which meant that women needed to tend to the home once more. The strategy for accomplishing this used advertising and household products that supposedly would make keeping house and childcare more efficient, easier and which would make the women more feminine again--out of those work clothes into dresses, girdles, gloves, and aprons. Nowhere was this more obvious than in 1950s television shows. Many of them stressed happy families--fathers, mothers, children, pets, the idealized past--Davy Crockett, Daniel Boone, and future--Tom Corbett, Space Cadet. This piece reflects that era with collage on my family’s original 1950s television. Ironically one of our favorite shows was MAMA, which included that comforting cup of Maxwell House coffee and the daughter Katrin’s reflection at the opening of the show that ended with “But most of all I remember Mama.” Their family had a cat as did we named Uncle Elizabeth because they thought it was male but had kittens. Warm, fuzzy, and ready for Betty Friedan.

While women were to a great extent emancipated by “the wheel,” or bicycle, giving them a freedom of movement and wardrobe they hadn’t had before, the automobile increased that freedom. This piece includes a car from each decade of my mom’s life. My dad, a true Detroiter, restored cars, including the Nash Metropolitan, which my nephew Scott now owns. But each new restoration was initially hard to get a drive in. The Beatles wrote a song about it. 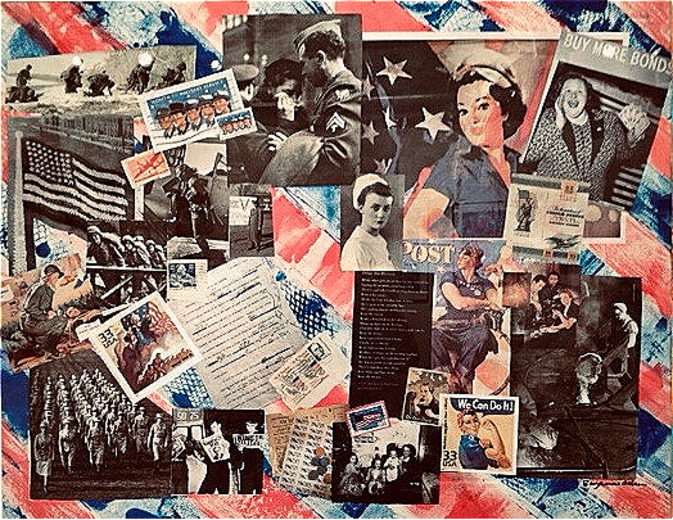 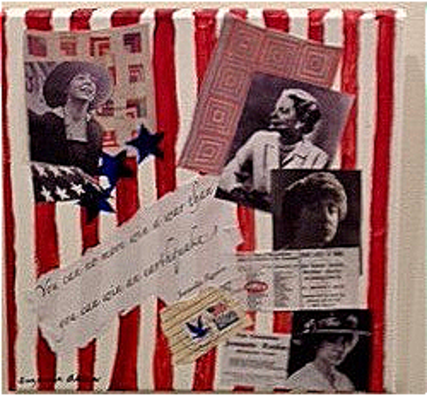 BUT MOST OF ALL I REMEMBER MAMA, top view.

Robin Morgan, who played the daughter Dagmar in the ‘50s TV show “Mama,” which I used on the television piece, is now a radical feminist. She has written the books appearing on the piece and runs a media center for women. She also writes for MS and coincidently was one of those who threw her bra into the freedom trashcan while protesting the Miss America pageant in the late ‘60s. Ironically, the bra was invented in 1913. 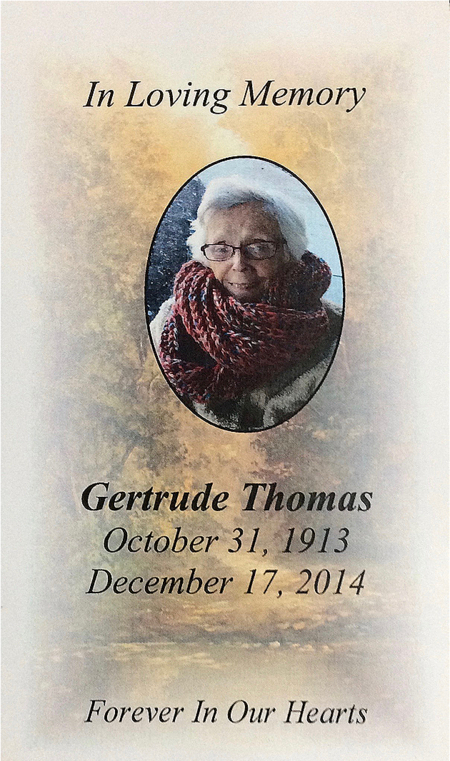 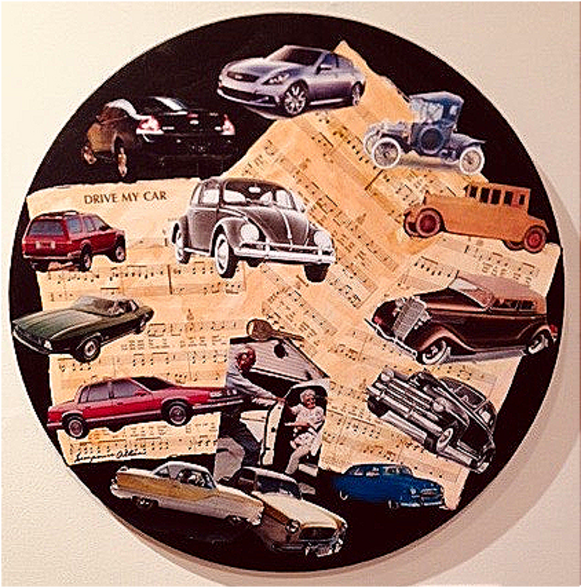 
During the ‘60s, which started with hope for Irish Catholic Democrats, we suffered a series of assassinations--JFK, MLK, and Bobbie Kennedy followed by leaders in other countries. Then we witnessed assassins assassinate assassins, widows with black veils covering their faces, sad children, an escalation of war in Vietnam, missiles from the Soviet Union, and a Wall separating East from West. Yet besides praying for peace and supporting equal rights, my mom danced at the weddings of her children. None of us lived the Madmen lifestyle; we were all teachers praying for peace and working for Civil Rights ourselves. This piece like several others is collaged on a background of a Gee’s Bend quilt to emphasize the fluctuation between hope and despair that characterizes the decade as a quilt contrasts with a widow’s black veil.

THE CENTURY’S SOUND OF MUSIC

My mom has listened and danced to music produced in many forms, from the player piano and regular piano and ukelele, using piano rolls and sheet music, to various forms of Victrolas and phonographs, using 78, 45, and 33 rpm records, to cassette tapes and CDs. Now she is entertained by her great grandchildren with music from iPods and computers. 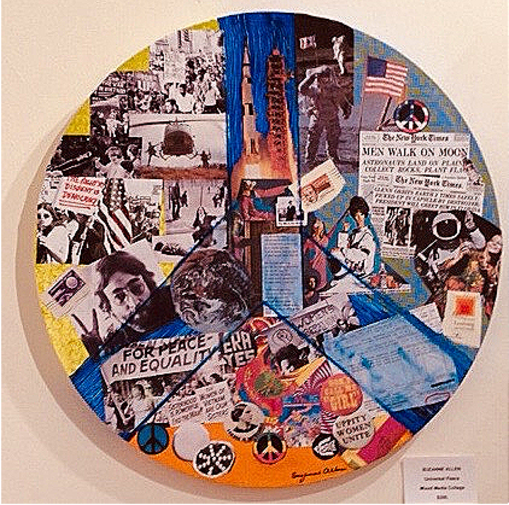 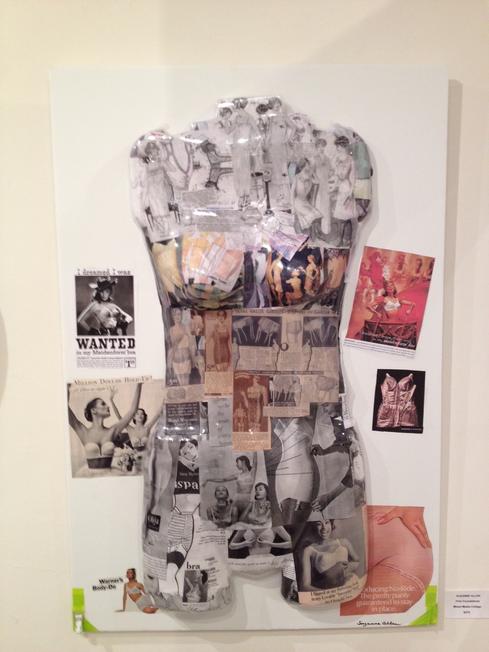 Like Firm Foundations, this piece traces the history of women’s bathing suits over the period of my mom’s life. She swam at the South Oakland Y until she was 97. The women at the top right of the piece got arrested for their daring bathing costumes. I would have thought it would happen to the bather wearing the thong at the bottom of the piece. It also includes the first Miss America and Miss America of 2013.