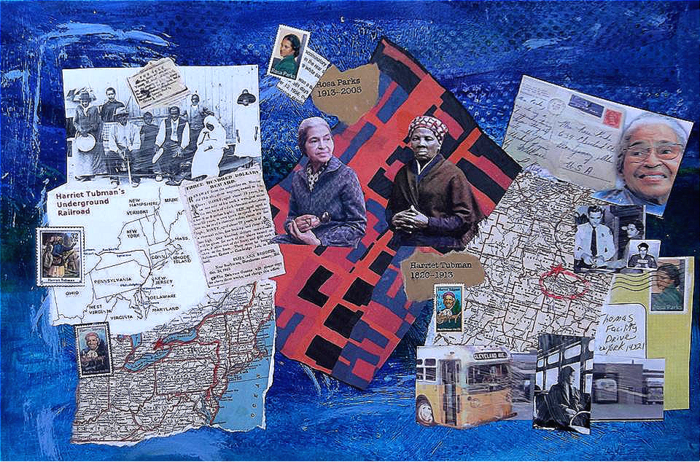 Gertrude McCormack was born on Halloween, in Patterson, New Jersey, known then as Silk City because it produced more silk than Lyon, France.
That year IWW organized a strike among the silk weavers, male and female, for better working conditions and shorter workdays. Elizabeth Gurley Flynn led the demonstration against the owners of the silk factories. She appears in the piece at top left above Silk City. At five, my mother and her family moved to Detroit, the Motor City. She (in the red bow) appears with her sister Joan and brothers Paul and Bernie in the circle at top. Women have always worked and the tools of their trades both at home and the factory are represented at the top of the piece.

The role of the traditional woman in 1913 is represented in the various fashions, instructions, and ads in the piece. Red bows seem to have trended in 1913. Some others “born in 1913” were Rosa Parks, Camels Cigarettes, Pyrex, the Ford assembly line (heralded at the time, but trouble waiting to happen), crossword puzzles, and the erector set--therefore, three Baby Gertrudes are mounted on the erector set pieces at bottom left.

At the end of World War I, an influenza epidemic swept the Western world, claiming many more victims than the war had. The page in the upper left is from hospital records for only a short time. The names in red died almost immediately while the others were admitted for further treatment. 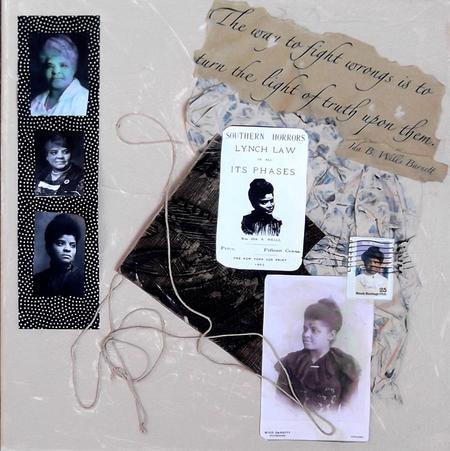 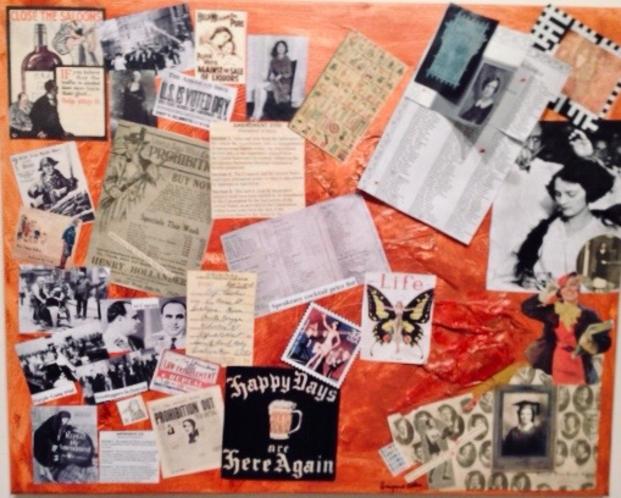 THE LIGHT OF TRUTH

Ida B. Wells-Barnett, who lobbied President McKinley for an anti-lynching law before the turn of the century, was a staunch supporter of woman suffrage. When the white progressive leaders of the 1913 suffrage parade timed for Woodrow Wilson’s inaugural
organized a back of the line position for African-American women, Wells-Barnett objected, joining the Illinois contingent. She continued to write and protest against lynching and for woman suffrage until the 1930s.

In the twentieth century, Carrie Chapman Catt and Alice Paul were two of the new generation of woman suffrage leaders. Catt was the talented political head of the National American Woman Suffrage Association. Paul took to the streets to support the cause of the Anthony Amendment, first introduced by Susan B when it would have been the 16th if passed. She directly confronted President Wilson, demanding his support. During the war she and those picketing the White House were called traitors and jailed. Catt and other leaders of the NAWSA, including Alice Stone Blackwell and Harriet Stanton Blatch, daughters of two pioneer suffragists, worked for success in the war. (Note Alice and Harriet as babies with their mothers, Lucy Stone and Elizabeth Cady Stanton and as adults lower right corner below my grandmother, Grace McCormack, who marched for suffrage, and daughters Gertrude and Joan). After a century of struggle, on August 26, 1920, women won the right to vote. In the fall, millions of women registered to vote nationwide. Catt said:

"Literally thousands of times, men have cast their votes on whether or not women should vote. . . Women have suffered an agony of soul. . .that you and your daughters might inherit political freedom. That vote has been costly. Prize it!"

From the time my mom started school until shortly after she graduated from high school, Prohibition was the law of the land, but she was definitely aware of the flapper’s shocking lifestyle and fashions because she bobbed her hair, upper right. After making all honors in school and being urged to become a teacher, she fell in love, grew her hair long again, and took a business course so she could get a job as a bookkeeper and work towards getting married to my dad, her high school sweetheart. 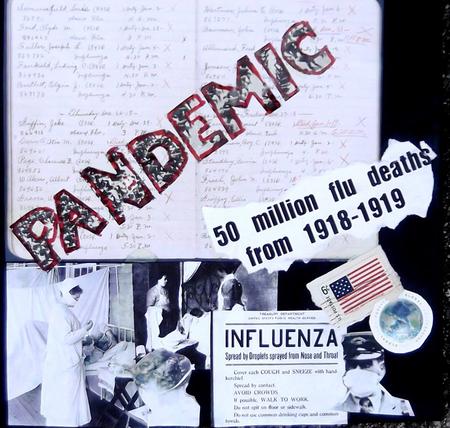 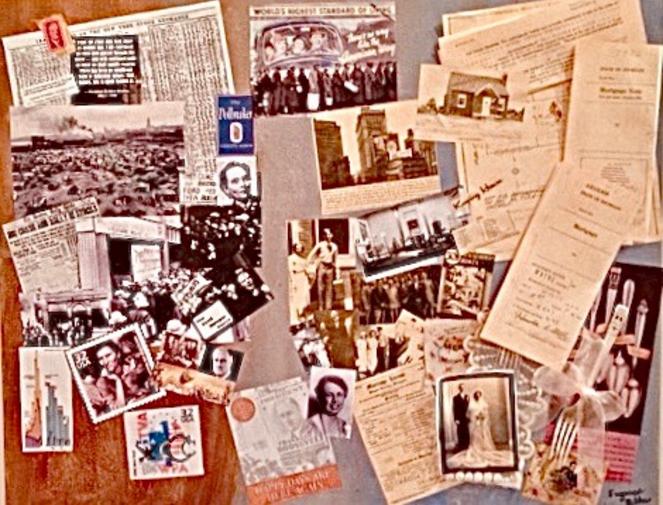 While men perished in the mud and fire in the trenches of World War I defending God and their flags, women nurses “over there” were charged with helping to ease their pain, fix their wounded bodies, sooth their troubled minds. Sometimes women drove the ambulances and transports and prayed for an end to the destruction as did the children on the home front. In this piece I tried to suggest the trenches and the flag and the comforting role by collaging on a background imitating a Gee’s Bend quilt. 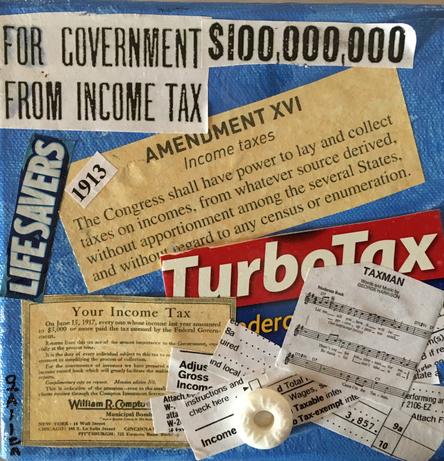 Women on the home front were in charge of preparing meals that would preserve rations for “over there.” They grew their own food and canned it. They entertained those in the armed services through the YWCA. They sold and bought liberty bonds. But most significantly, they replaced men in their former jobs as well as in the manufacture of war weapons. Yet they were sometimes suspected of spying. Children aided in the domestic jobs. And everyone waited and prayed for the end of the war. Again I used a background of a Gee’s Bend quilt on which I collaged the same image of my mom making her First Communion that I used the other WWI piece. 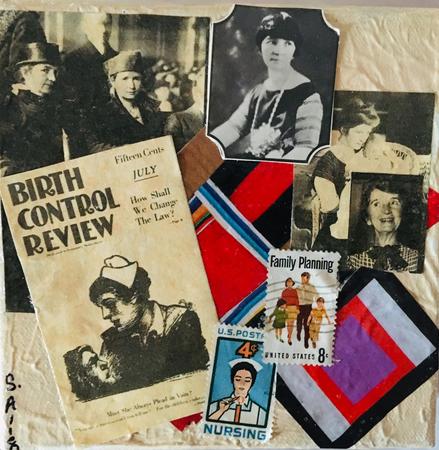 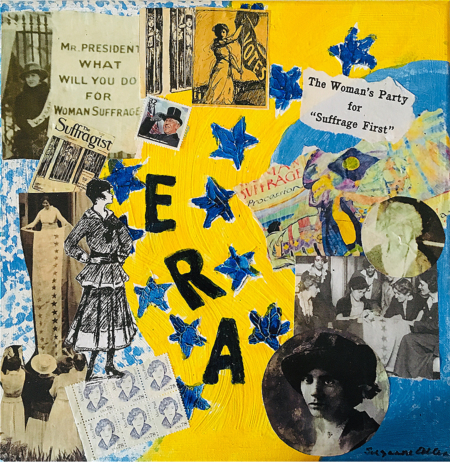 The Irish Revolution and the Bolshevik Revolution in Russia occur as the world gears up for the Great War. England’s attitude toward the two revolutions is interesting. Of course, Russia was England’s ally in the war. 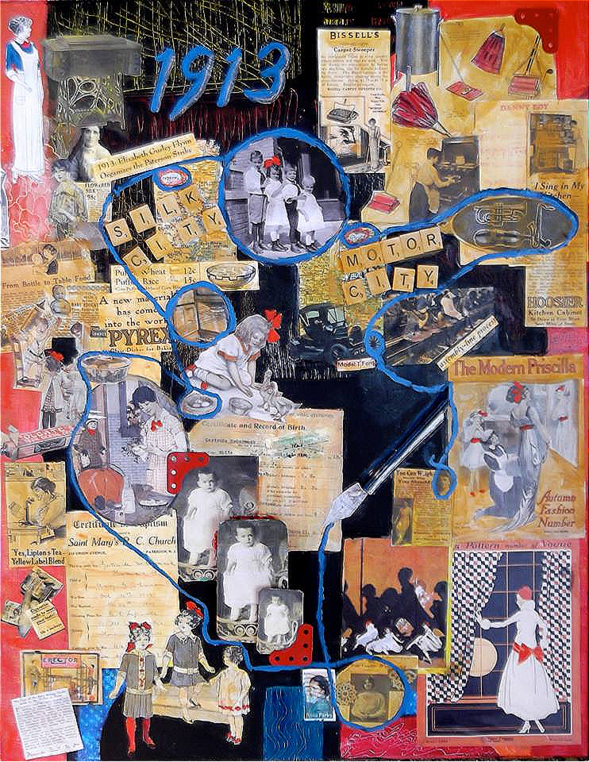 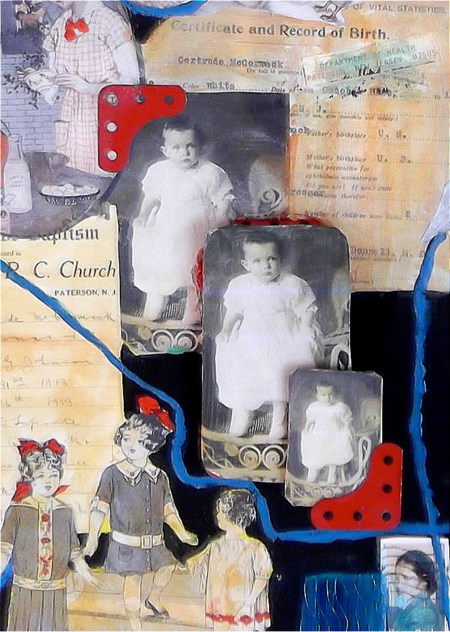 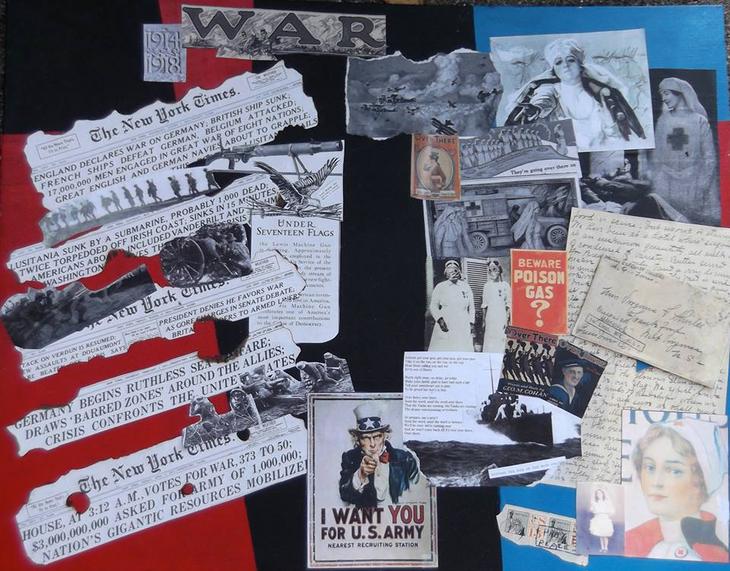 THE AMERICAN DREAM WAS NOT DEAD YET

My parents succeeded in working after they graduated despite the Depression. They both worked at People’s Outfitting Company in downtown Detroit, thanks in part to my grandfather T.J. McCormack, who was the display manager there. My dad painted signs and later followed my grandpa as display manager there.  My mom held several other bookkeeping jobs, including one at Social Services in the late ‘30s.  Finally on August 26, 1939, they married and bought the house they lived in together until my dad died. My mom lived there until 2000 when she came to live with me. The fork was part of one of their wedding gifts. 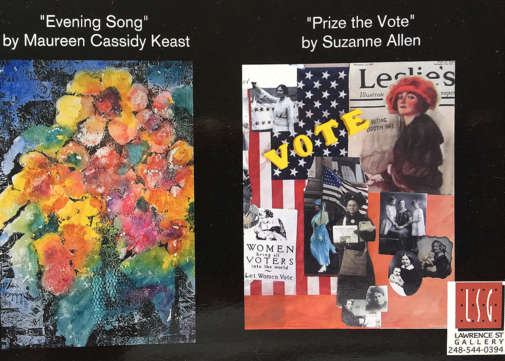 Harriet Tubman, a hero for her role as general/conductor on the underground railroad, leading hundreds of slaves to freedom, died in 1913. Rosa Parks was born in 1913, inheriting freedom’s torch which she would use on a bus to continue the fight for freedom for all. 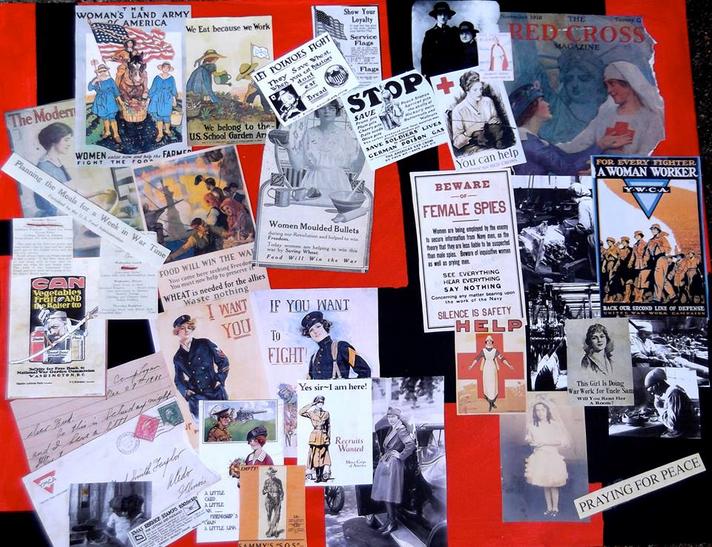 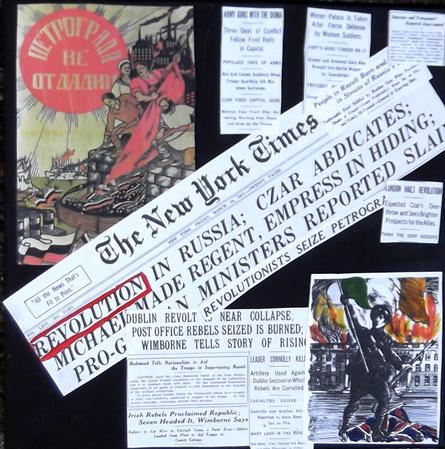 In 1912, Elizabeth Gurley Flynn led a strike in Lowell, Massachusetts of women millworkers--with Margaret Sanger--for better hours and working conditions. In the year and city my mother was born, 1913 in Patterson, New Jersey, the Rebel Girl (as Flynn was called by Joe Hill, an IWW organizer unjustly executed for a murder he could not have committed) was one of the leaders of a strike of all the silk weavers in Patterson. Gains for the workers were minimal. The owners could afford to outwait the workers who needed to eat. Flynn was also one of the founders of the ACLU, but was later jailed for being a member of the Communist Party. She is buried in Chicago with the members of the Haymarket Massacre. 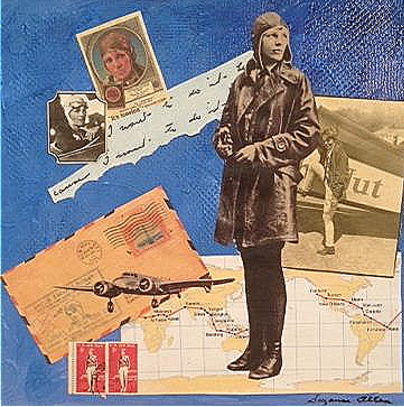 This was a two-woman show with Maureen Cassidy Keast. The works I prepared for this show were a celebration of my then-100-year-old mother’s lifetime. In my pieces, I reflected on my mother’s lifetime by examining her life alongside the changing role of women decade-by-decade from 1913 through 2013.

Several pieces focus on significant women and events of the various decades while weaving together images of my mother’s growth and development through all those turbulent years.

Alice Paul founded the Women’s Party in the USA. She had been schooled in the tactics of the militant suffragettes in England.  These tactics, especially protesting in front of the  Woodrow Wilson White House during WWI, got her and others jailed. In jail, they conducted a hunger strike and were force-fed. But they prevailed and after the vote was won in 1920, Paul sewed a star on the suffrage flag for each state ratifying the Nineteenth Amendment until Tennessee became the state needed to ratify it. She then devoted herself to passing the Equal Rights Amendment.

BECAUSE I WANT TO DO IT

Amelia Earhart was a pioneer aviator in the 1930s. She was the first woman to fly solo across the Atlantic. In 1937, she embarked on a flight around the world "because she wanted to," but disappeared over the Pacific. Her disappearance remains a mystery.

Margaret Sanger wanted all children to be “wanted.” Because of this she was herself wanted and tried and convicted of sending illegal pamphlets in the mail. Though her motivations for opening a birth control clinic in the slums of New York City have been questioned, those who came to the clinic thought of it as a Godsend. 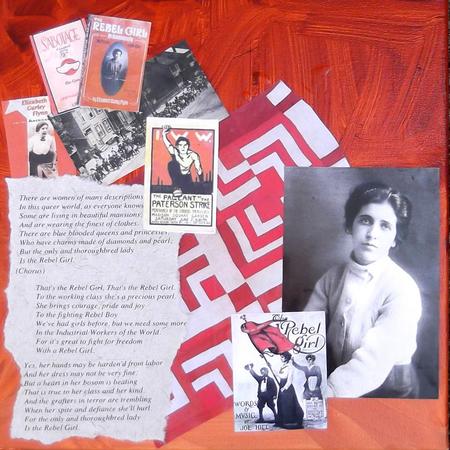 The Sixteenth Amendment to the Constitution calling for an income tax went into effect in 1913. Lifesaver candy was also “born” in 1913. Coincidence? Actually it probably had as much to do with liquor and disguising its smell, but you never know.